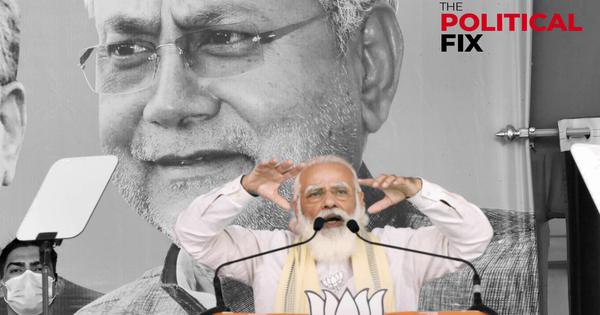 Happy Diwali! Welcome to The Political Fix by Rohan Venkataramakrishnan, a newsletter on Indian politics and policy. To get it in your inbox every week, sign up here. The newsletter was off last Friday for Diwali, but you can read previous Friday Q&As here.

We don’t charge for this newsletter, but if you would like to support us consider contributing to the Scroll Reporting Fund or, if you’re not in India, subscribing to Scroll+.

The Big Story: One Last Job?

Nitish Kumar will be sworn in as chief minister of Bihar for the seventh time on November 16. If he survives the entirety of the five-year term, Kumar will have become the state’s longest-serving chief minister.

This endurance is no small feat in any Indian state, and particularly at a moment when, as we wrote two weeks ago, the last few years have seen a number of long-serving chief ministers toppled by the public. It is even more impressive because Kumar does not come from either a forward caste or a dominant one like the Yadavs, hailing instead from the Kurmi community, who make up just around 2% of the Bihar population.

The other noteworthy detail – though it may not seem like a fact in his favour – is that Kumar and his Janata Dal (United) have never won a majority in the state by themselves. Indeed, in this election, the Janata Dal (United) won just 15.4% of the overall vote, lower than that of its ally, the Bharatiya Janata Party, which garnered 19.5% and far behind the Rashtriya Janata Dal, which had 23.1%.

The fact that Kumar will still be chief minister, despite this relatively poor showing, is a testament to his hold over politics in the state.

However, the fact that he had to float the idea of this being his final election in the last week of the campaign, presumably to gain sympathy votes, indicated that Kumar’s grip over the state may be coming to an end.

The over-simplified story of the Janata Dal (United)’s path to victory in Bihar, despite the numerical disadvantage of a leader belonging to a caste without sizeable numbers, is this:

“Nitish Kumar successfully sold himself as a symbol of development, with his Kurmi background going from a liability to an asset, since it suggested the state would not be dominated by one community as it had been under former chief minister Lalu Prasad Yadav. Kumar managed to unite a larger tapestry of voters by pointing to villains – the ‘jungle raj’ of the Yadav rule in 2005 and 2010, the non-Bihari outsider BJP in 2015 – and by allying with parties that could bring in the votes that he couldn’t.”

The over-simplified story of the BJP’s path to victory nationally under Narendra Modi, despite its earlier identification with mainly the Brahmin and Bania communities, is this:

“Narendra Modi successfully sold himself as a symbol of development, with his non-dominant caste identity going from a liability into an asset, since it meant that the BJP could attract the vast majority of voters beyond those communities, even if each of the castes supporting him were individually small in number. Modi also managed to unite a larger tapesty of voters by pointing to villains – Muslims, the ‘secular elite’ and ‘anti-nationals’ – and by relying on the Rashtriya Swayamsevak Sangh to bring in the votes that local BJP state units would struggle to.”

There is obviously much more nuance to the stories of both of these parties and leaders. Yet the summaries explain why both are compelling as products of the post-Mandal era, with their political trajectories appearing like a direct reaction to the preminance of dominant castes, such as Yadavs, in the decades after quotas in government jobs were introduced for Other Backward Classes.

Political scientist Christophe Jaffrelot, to whom we spoke on the Friday Q&A two weeks ago, explained how India arrived at this post-Mandal moment earlier this year.

What does that tell us about the 2020 Bihar election, in which, at face value, both Modi and Kumar succeeded?

First, as I wrote last week, while the final numbers of the contesting alliances were identical to the figures they had going into the election, the underlying break-up revealed tremendous upheaval. The main story is the BJP going from junior partner in the alliance to lording over the Janata Dal (United), which has 30 fewer seats.

It is important to point out that the Opposition Rashtriya Janata Dal actually garnered the largest vote-share and seat count.

Yet the broad headlines from the elections seemed to imply that the key takeaway was how Modi had beaten his own ally – and former rival – Nitish Kumar into submission, if not defeat.

Kumar is now expected to be just another relatively subdued Narendra Modi-era chief minister, subordinate to Delhi, and will also have to contend with two deputy chief ministers from the saffron party, neither of which will be Sushil Kumar Modi, the BJP leader who had tended to remain in his corner despite much sniping within the party.

However, this narrative is complicated, as I also wrote in a separate piece, by a conventional media perspective that sees a BJP masterstroke in a deeply cynical move that would have earned severe censure if it came from the Opposition. In fact, it’s a strategy that may have been responsible for nearly sinking the Modi-Nitish Kumar alliance.

In this case the BJP failed to , or perhaps even actively propped up, a national ally to contest against its own coalition – but primarily in Janata Dal (United) seats. The ally, the Lok Janshakti Party, whose leader Chirag Paswan openly said he wanted to hurt Nitish Kumar and make the BJP stronger, ended up spoiling the Janata Dal (United)’s chances in at least 27 seats.

In the eyes of political analyst Sajjan Kumar, this is proof that the narrative is all wrong. Instead of seeing the BJP’s success against the Janata Dal (United)’s dropped seats as evidence of an anti-Nitish Kumar mood – which seemed to emerge in reports and even opinion polling – it signifies the failure of Modi to transfer votes as successfully as his alliance partner did.

Had the Lok Janshakti Party not been in the fray, and all of those votes gone mainly to Kumar’s party, the Janata Dal (United) would have had nearly as many seats as the BJP, and the alliance would have had a two-thirds majority. The CSDS-Lokniti post-poll survey seems to bear this out, showing that the Lok Janshakti Party “swung a segment of the traditional BJP voters in its favour (around 13%), thus damaging the prospects of the JD(U) candidates”.

Because the Lok Sanshakti Party was not officially allied with the BJP, it is hard to disentangle exactly what this means. Clearly there was massive support for Modi in the state, as the post-poll survey also indicated, yet not enough that the BJP felt it could contest without Nitish Kumar.

The Modi support also did not dent the prospects of the opposition Rashtriya Janata Dal, which saw its vote share increase from 2015, even though it had been routed in the 2019 Lok Sabha elections. Rajan Pandey of People’s Pulse, in fact, argues that the Rashtriya Janata Dal appears to have attracted at least a portion of the Mahadalit and Extremely Backward Classes voters that used to be in the Janata Dal (United) camp.

Roshan Kishore’s conclusion was that the election was, in some ways, inconclusive:

“The 2020 result in Bihar tests the limits of all kinds of vanguardism.

It continues to frustrate the BJP’s hopes of becoming the Hindutva vanguard. Nitish Kumar has learnt that the politics of being the lesser evil in the name of posing as a vanguard of governance is doomed to end in a political coup d’état.

[And] the RJD still seems to be paying the price for a sectarian betrayal of the non-Yadav backward castes in whose name Lalu Prasad assumed the vanguardism of social justice in the 1990s.”

This is why the BJP’s efforts to outflank Nitish Kumar, even as it installs him as chief minister, will be closely watched. The 69-year-old Kumar already said once on the campaign trail that he expects this to be his last election, though his party said this was wrongly interpreted.

The BJP will hope to hold him to his word. As one unnamed BJP source told the Indian Express, “we have almost succeeded in making Bihar politics bipolar. Once Nitish Kumar is out of the political scene, it is BJP versus RJD in Bihar.”

But will Kumar, famed for his political wiliness, find a way to defy expectations that he and the Janata Dal (United) will leave the field vacant for the BJP in the only Hindi-belt state it has yet to win by itself? Or will the chief minister’s office end up being a gilded cage before the BJP puts Kumar out to pasture?

Can’t make this up

West Bengal political activity is already getting heated, ahead of elections next year:

Thanks for reading the Political Fix. If you enjoy this newsletter, please do share it. We’ll be back on Friday with a new Q&A. Send suggestions and feedback to [email protected]

5G will be critical to New York’s economic recovery

FinancialSwingCoach
0
Almost all businesses, whatever their size, have had to dramatically rethink their operations. Many shifted to online commerce, moving from bricks to clicks—which...

FinancialSwingCoach
0
The 2020 Presidential Election proved that the Hispanic electorate is complex and that campaigners need to make a connection with different communities. ...
© Copyright 2019 - FinancialSwin - All Rights Reserved.