On the evening of the 30th, President Xi Jinping had a video meeting with German Chancellor Merkel, French President Macron, European Council President Michel and European Commission President Von der Leyen in Beijing. The leaders of China and Europe jointly announced the completion of the China-EU investment agreement negotiations on schedule, drawing great attention from the media.

According to the Xinhua News Agency quoted by the Russian Satellite News Agency on December 30, Chinese President Xi Jinping said that the China-EU investment agreement shows China’s determination and confidence in promoting a high level of opening up. He emphasized that the Agreement will stimulate the recovery of the world economy in the post-epidemic period, strengthen the international community’s confidence in economic globalization and free trade, and make an important contribution to the construction of an open world economy in the two major markets of China and Europe.

Xi Jinping said that 2021 is coming soon. As the world’s two major forces, markets and civilizations, China and the EU should show responsibility and act actively to be cooperative builders of world peace and progress. The two sides should strengthen dialogue, enhance mutual trust, deepen cooperation, properly handle differences to work together to cultivate new opportunities.

According to a report by the German News Agency in Berlin on December 30, the German government praised the EU-China investment agreement as a great success at the end of Germany’s EU presidency and said that the agreement was “a major development” and the “most ambitious agreement” reached with China.

The government also stated that the dialogue and implementation process has been determined. So far only the free trade agreement process can be compared with it, which is also “compatible” with other agreements internationally.

Japan’s “Fuji Sankei Business Daily” reported on December 30 that through the conclusion of an investment agreement with China, the EU will rely on investments in the fields of automobiles and biotechnology to increase its contact with the Chinese market.

On the other hand, for China, signing the agreement with the European Union can not only confirm its mainstream position in geopolitics, but also reduce the risks brought by the EU’s strict control of Chinese investment. In addition, this move will also help initiate negotiations on the China-EU Free Trade Agreement.

However, the investment agreement seems to be “running against the general trend of the world in recent years.” In the past four years, except for ignoring the rules of the World Trade Organization, Trump has also launched a trade war against China. In addition, he also applied tariff pressure on goods imported from European allies, which shaken the international order since World War II.

In the face of various twists and turns, the EU finally chose to side with China despite Trump’s tough policy towards China. It has also been promoting cooperation between China and Western countries in response to climate change and the coronavirus. In September, the EU expressed its support for the Chinese government to strengthen its decarbonization goal. Besides, in order to restore multilateral cooperation, the EU has also done a lot of work for the next US President Biden.

EU’s support for reaching the agreement reveals its intention to shift its energy to economic opportunities in Asia. Last year, China became the second largest trading partner of the EU after the US, with an average daily bilateral trade volume exceeding 1 billion euros.

According to a report on the German “Economic Weekly” website on December 29, the China-EU investment agreement negotiations achieved a breakthrough in time before the end of the year. For German Chancellor Merkel, who made the agreement a top priority, this was a huge victory that Germany achieved during the EU’s rotating presidency.

The European Commission also praised the agreement as a major breakthrough. Merkel made a decisive contribution to the conclusion of the agreement, because she hopes that the agreement will benefit the German automotive and telecommunications industries. Macron supported her for the French financial industry hopes to win good business in China. From their perspective, the timing is right: Despite the raging COVID-19 pandemic, China is the only major economy that has achieved positive growth this year. 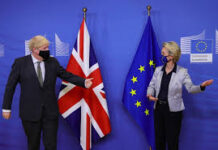 FinancialSwingCoach
0
Air New Zealand's all-new business class could include an upmarket Row 1 experience compared to the rest of the Business Premier cabin. The move...

FinancialSwingCoach
0
• The platform economy could provide a boost to employment during the pandemic recovery period. •...
© Copyright 2019 - FinancialSwin - All Rights Reserved.