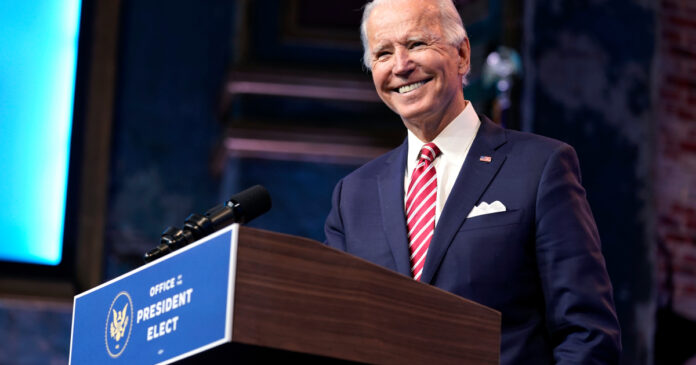 United States President-elect Joe Biden issued his sternest warning yet to President Donald Trump, saying “more people may die if we don’t coordinate” as the coronavirus pandemic surges across the country months before Biden’s inauguration.

Biden also called on Republican senators to step up and pass a bill like the $3-trillion Heroes Act to provide much-needed economic relief to the country’s struggling families and businesses now.

“Once we shut down the virus and deliver economic relief to workers and business, then we can start to build back better than before,” Biden said, reiterating a theme of his campaign.

In his first address on the economy since winning the presidential election, Biden told reporters that he and Vice President-elect Kamala Harris received “a mandate from the American people” to bolster cooperation between Democrats and Republicans and voters “want us to deliver results.”

A new round of coronavirus economic relief aid has been at a deadlock as congressional Democrats led by House Speaker Nancy Pelosi and the Trump White House seem unable to come to an agreement.

Biden called on Republican legislators to join Democrats in passing a bipartisan relief bill as quickly as possible.

“There ought to be at least a dozen [Republican senators] who have the courage to stand up and save lives and jobs now,” Biden told reporters gathered at his transition team’s headquarters in Wilmington, Delaware.

Election exit polls showed COVID-19 and the economy were the top issues on the minds of US voters.

The Dow Jones Industrial Average and S&P 500 indexes rallied to record closes Monday on news of positive preliminary trial data from Moderna on its COVID-19 vaccine. Last week, markets were buoyed by promising news from vaccine makers Pfizer and BioNTech as well.

At the same time, millions of Americans continue to suffer from slow economic growth and entrenched unemployment.

Biden warned Monday that as many as 20 million Americans face the looming prospect of mortgage defaults and evictions when a moratorium expires at the end of the year.

Earlier in the day, Biden had offered an optimistic assessment in a meeting with business and labour leaders at his transition team’s headquarters in Delaware, The Associated Press news agency reported.

“We agree that we can’t just go back on the economy,” Biden said.

“I don’t want to be falsely optimistic,” he added. “I think we can do this.”

Biden said Monday he intends to issue an executive order requiring facemasks be worn on all federal property when he takes office on January 20 and will press governors to impose similar orders.

The prospect of a viable vaccine has boosted hopes that an end to the pandemic is in sight, even if it will be many months before millions of vaccine doses can be delivered.

But members of Biden’s coronavirus task force are struggling with how to solve the crisis without causing more economic damage through shutdowns.

Already, the new surge in COVID-19 cases is forcing state and local leaders to implement new rounds of restrictions on businesses.

Governors and mayors across the country – from Pennsylvania to California – are imposing new restrictions to try to stem record-breaking numbers of infections in advance of a time when Americans traditionally travel to be with their families for the Thanksgiving and Christmas holidays.

Cancelled travel plans and shuttered businesses have an economic impact, of course.

Biden has pledged to spend trillions of dollars in government spending to reinvigorate US manufacturing, expand health care coverage and combat climate change, among other priorities.

Whether the president-elect can deliver on those bold ideas may be down to who controls the US Senate. Republicans, who blocked a stimulus deal before the election, still hold control – but two seats are up for grabs in a runoff election in the state of Georgia on January 5.

Meanwhile, Biden is in the process of selecting a nominee to lead the Treasury Department, a key position for managing the nation’s economy.

Whomever Biden picks will have a large and unequal economic recovery ahead of them amid a continuing pandemic.

Moderna announced Monday that preliminary data from a continuing phase three study found its COVID-19 vaccine to be 94.5 percent effective.

“The results of this trial are truly striking,” Anthony Fauci, director of the National Institute of Allergy and Infectious Diseases, said on a conference call with reporters, Bloomberg reported.

But widespread distribution of COVID-19 vaccines in the US is not expected until mid-2021 at the earliest, making continuing economic relief a likely necessity for the foreseeable future.

FinancialSwingCoach
0
Overwhelmingly positive COVID-19 vaccine data from Pfizer stands as a much-needed reminder that there is a future after this Groundhog Day hamster wheel...

FinancialSwingCoach
0
Sovereign bankruptcies are a collision of finance, economics, law and geopolitics. Zambia is a perfect example.The African copper producer stumbled into the coronavirus...

FinancialSwingCoach
0
But in this moment of rising unease, it was noticeable what Biden did not say in his speech. He did not extend any...
© Copyright 2019 - FinancialSwin - All Rights Reserved.