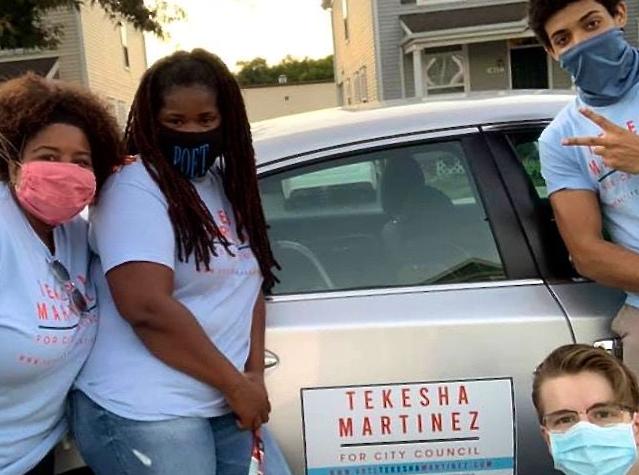 Not every college sophomore can claim to have helped organize a successful political campaign, but Hagerstown’s Brett Guessford can.

Over the summer, inspired by the racial justice movement and being mostly confined indoors because of COVID-19 restrictions, Guessford decided to get involved with local politics for the first time.

The second-year student at Georgetown University in Washington, D.C., connected with Hagerstown City Council candidate Tekesha Martinez, with an offer to help with her online and social media presence.

He and some friends ended up doing a lot more — and it worked.

Martinez, who placed ninth of 10 in the primary to move onto the general election, wound up with the third-most votes in race, according to unofficial results from the Washington County Board of Elections.

Both Guessford and Willard are studying government, while Mothershed is majoring in political science.

“People want to get involved. Sometimes they just need a bump to say, ‘This is how you can do it,'” Guessford said.

In total, the campaign team canvassed almost 62 miles of Hagerstown by foot, handing out roughly 20,000 cards Guessford designed, which included information about Martinez and her platform.

“There wasn’t as much in-person, on-foot campaigning and I think that’s what a lot of people appreciated — that we were willing to actually be there in person and go to their door to give them information rather than just depending on them to figure it out for themselves,” Mothershed said.

Even while in groups up to 10 or more people, Guessford said they stayed safe with COVID-19 precautions, wearing masks and using ample amounts of hand sanitizer.

He also said they began campaigning long before other candidates, also handing out around 90 yard signs, numerous T-shirts, and car magnets.

Campaign treasurer Lakenya Austin said Guessford, Mothershed and Willard did research to strategize what materials would be most effective where.

Political newcomer Martinez said she did not do much campaigning before the primary and hadn’t thought much about it until Guessford reached out.

After an initial meeting over Zoom, Mothershed sent out Google Drive documents to keep everyone updated and to help everyone stay connected.

“I was like, ‘Oh, these kids are brilliant. We totally need them,” Martinez said.

Despite the praise from Martinez and others, Guessford said he was going off of instinct and making some things up as he went along. He said he did not really pay attention to what other candidates were doing or what was considered “typical” for a local campaign.

Instead, he adapted what seemed to be working at the time.

“Usually when you look at a local campaign, obviously it’s going to be an uphill battle for anyone who’s not a big name and so you’re going to have to do something big to overcome that,” Guessford said.

The campaigning didn’t stop even on Election Day.

Guessford said there were volunteers holding signs and handing out cards about Martinez at each Hagerstown polling location to get out last-minute information to any Hagerstown voter possible.

“Not a lot of people go into the polls and know every single thing about every single one of the 10 candidates and know exactly what five they’re going to pick out,” he said.

Up until the numbers started coming in, Guessford said he did not know how things would play out, but it was a “relief” that their efforts paid off.

Willard said he had enduring faith in the campaign.

“The effort she already put into the town was undeniable from the get-go,” he said.

Anastasia Broadus acted as a liaison between Martinez and the young volunteers, who took over control of many aspects of the campaign to allow Martinez to continue her work as a mediator.

Broadus said their efforts made things considerably easier, and she knew she could just share one of their social media posts and not have to worry about its contents as they would not misrepresent Martinez.

Martinez said today’s youth are often held back by older people being too controlling or attempting to micromanage every action.

“I think if we put more trust on the youth that our ideas and things will move quicker,” Martinez said. “We’re all doing something wrong being old.”

FinancialSwingCoach
0
The latest shake-up in global equities has left investors wondering whether a switch in favour of an unloved corner of the market has...

FinancialSwingCoach
0
Everyone who invests in the stock market wished they could go back in time and decide which stock to buy.  One of the...

Let’s Celebrate Representation Without Putting Politicians on a Pedestal | by Nicole Froio |...

FinancialSwingCoach
0
Seeing ourselves reflected is important, but there’s more work to be doneRep. Alexandria Ocasio-Cortez (D-NY) looks out towards a crowd during a food...

AB Science secures equity financing for a maximum of 4 million shares with Alpha...