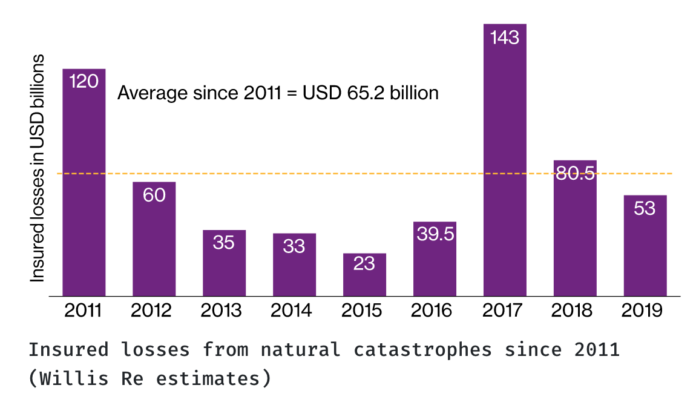 Natural catastrophes have always included an element of political risk. Whether it involves seeking aid from other countries or non-governmental organizations (NGOs), or simply the allocation of a country’s resources by the party in power, there’s no shortage of political calculus in post-disaster decision-making. In developed markets, the impact of political risk has been generally more manageable than in emerging economies, which has resulted in a certain amount of comfort and predictability to those in the former who are affected.

This year, we’ve seen conventional thinking turned on its head.

A wave of significant catastrophe events have struck the United States, Canada, and Japan (not to mention what could be a costly windstorm in Continental Europe), following a number of active catastrophe years, going back to 2017. Remediation is rarely completed in the same year as the event, which means the recent past remains very much a part of the present. The convergence of both COVID-19 and its attendant political risk – and other forms of political risk not directly tied to the pandemic – has created an unusual challenge for the global re/insurance industry in supporting their end-customers when affected by natural catastrophes.

Political risk as manifested in 2020 has become more difficult to avoid than prior iterations (such as the designation of Superstorm Sandy as a “non-hurricane” by some US state governors in 2012). And the stakes could be higher than simply deciding whether or not hurricane deductibles apply, or whether a broad range of socio-economic factors is driving claim inflation – a common topic of re/insurance industry gossip. So, the issue isn’t new.

What’s different this year is that long-simmering tensions around the world have been brought to the forefront by COVID-19, economic strain, and social unrest. Against the backdrop of these (and other) concerns, we’ve seen political risk manifest, particularly in regard to COVID-19 – with tracking and reporting changes in Brazil, the United States, and other countries limiting transparency and thus impeding progress.

What’s more concerning though, is that we’ve seen political risk start to encroach more directly on catastrophe response. While it may be difficult to measure the impact, it’s pretty clear that political risk – as a dimension of natural catastrophes – is one that requires much more consideration by the global re/insurance community, as well as the myriad NGOs and aid agencies that support people in such difficult times.

So, what are the key ways that political risk could become a more pronounced input into natural catastrophe risk and response? Here are five crucial concerns:

Whether hurricane, wildfire, hail, or whatever else Mother Nature throws at us, early intervention can help save lives and protect property. And political decisions can make all the difference – particularly when it comes to the amount and velocity of post-event mitigation measures (including aid) to be deployed. Budget reductions for emergency management departments, reorganizations of agency responsibilities, and resetting of priorities can impede disaster response, potentially lifting industry-wide insured losses. And with many catastrophes requiring attention at once, political risk may merge with the sheer volume of catastrophes in progress, so limited resources could be one problem, which is subsequently exacerbated by political risk.

If a natural catastrophe is sufficiently large to require mass evacuations or other large-scale relief efforts, the use of personal protective equipment, protocols for social distancing, and other measures intended to constrain the transmission of COVID-19 could directly impact the ability of insurers, NGOs, and other relief professionals to provide support – not to mention the real-world productivity of every dollar, asset, and person deployed to help.

Political factors could turn relief efforts into cases of significantly increased transmission. Or, the fear of creating a “super-spreader event” could result in sub-optimal disaster response. Further economic impact could come from a consequent temporary shrinkage of the labour force, reduced access to catastrophe-affected areas, supply chain disruption, and a general increase in post-catastrophe remediation expense.

The United States is a likely example, but the problem of highly polarized voting behaviour is broad and growing, making legislative gridlock a concern for post-catastrophe response and remediation (to include humanitarian measures). Narrow majorities could have profound implications for the flow of funds and other forms of relief when government spending is required to address post-catastrophe concerns. Unrepaired roads, for example, could impede the flow of adjusters, contractors, and materials, leading to higher repair costs over time, especially for certain types of claims (e.g., those involving roof damage).

Political risk becomes most pronounced when support is apportioned based on the political leanings of affected areas. This creates the sort of situation where a cross-border catastrophe (such as a multi-state catastrophe in the United States) could result in different levels of federal support for each affected area based on political leanings. As an electorate becomes more polarized, the risks of this sort of behaviour increase profoundly. It could also lead to second-order risks such as strike, riot, and civil commotion (SRCC), which could result from a population that believes it was treated unfairly by elected officials.

The global insurance industry is quite familiar with “fire following” when discussing earthquake losses (involving whether the fires that follow an earthquake event are included in the event). After 2020, it may be time to add “SRCC following” to the industry lexicon. Thankfully, we haven’t seen the issue arise, but the fact that 2020 has been an active natural catastrophe year and also had the largest riot and civil disorder event in US history, as designated by Property Claim Services (PCS) – i.e., the George Floyd riots of May and June – should make the risk-bearing community take note.

Continually percolating unrest in the United States and around the world may only need a localized event to trigger broader riots in other cities or around the world. A natural catastrophe could play that role, depending on whether other social and economic factors are also present. A late-season hurricane affecting a state in the throes of a COVID-19 wave, suffering attendant economic malaise in the week before the US presidential election is the sort of scenario that gives the PCS team pause.

The first global pandemic in more than 100 years, COVID-19 has spread throughout the world at an unprecedented speed. At the time of writing, 4.5 million cases have been confirmed and more than 300,000 people have died due to the virus.

As countries seek to recover, some of the more long-term economic, business, environmental, societal and technological challenges and opportunities are just beginning to become visible.

To help all stakeholders – communities, governments, businesses and individuals understand the emerging risks and follow-on effects generated by the impact of the coronavirus pandemic, the World Economic Forum, in collaboration with Marsh and McLennan and Zurich Insurance Group, has launched its COVID-19 Risks Outlook: A Preliminary Mapping and its Implications – a companion for decision-makers, building on the Forum’s annual Global Risks Report.

Companies are invited to join the Forum’s work to help manage the identified emerging risks of COVID-19 across industries to shape a better future. Read the full COVID-19 Risks Outlook: A Preliminary Mapping and its Implications report here, and our impact story with further information.

Over the long term, political risk can manifest in natural catastrophe risk, as well. And even though the above considerations are more immediate, it’s crucial that we remember the decisions we make today will shape the future for decades to come. With this in mind, it’s important to include climate change (and attitudes toward it) as a political risk.

In addition to the split on views of climate change in general, there’s the second-order risk that comes from the potential for a majority party to change frequently, which can make it difficult to set and achieve long-term policy objectives that may require a decade or more to realize. As a result, in a two-party (or two-coalition) system, long-term policy may be defined by the inability to establish long-term policy.

China surpasses the U.S. as Germany’s largest export customer for the first time

FinancialSwingCoach
0
The upcoming summit of the G20 will be a "milestone", Saudi Arabia, the chair of the powerful economic bloc, said on Sunday amid...
© Copyright 2019 - FinancialSwin - All Rights Reserved.